How to Save Your Car from Hail Damage 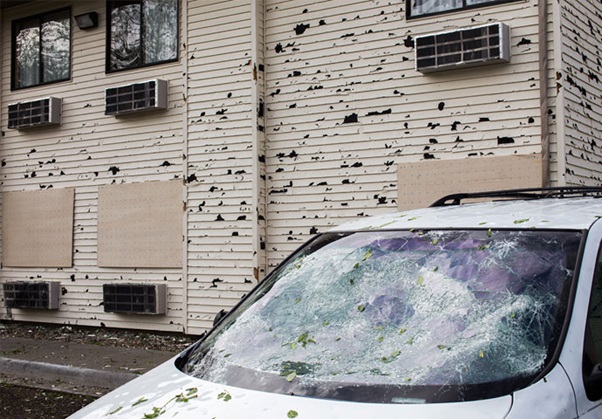 Have your recently bought car has faced with damages from an unpredictable hailstorm could cause out of the blue? Are you shocked from the level and variety of damages it can cause to your car? Well, there is nothing to panic and get disoriented about. All the damages that your car has gone through can be repaired without a strain of mark, and if you choose a place like the Spokane Valley hail damage repair center, you can expect your car to reappear with a spotless, shining body without a trace of any repair work.

But to be on the safe side, you must know in advance, what and all damages a hailstorm can inflict on your car. Depending upon the force with which the ice balls fall on your car body, the level of damage can be guessed. But things can go pretty out of control, if they fall on the windshield, or damage the roof mercilessly. In case of a broken windshield, you are not left with any other option but to replace it, but when the damages, that are mostly deep dents, are seen on the hood, the roof, the booty, you need to go straight for a hail damage repair, which can be done at any authorized auto body shop.

Usually, the hailstorm can cause ugly scratches on your car body, or fell deep dents on the roof, hood and rear end, if it is a sedan. The damages can be even more severe where you might have to replace the windshield or the window glasses, if the ice balls have shattered them, or caused a crack.

If the hailstorms have left your car body with some ugly scratches, the appearance of your car can be brought back to the original condition by erasing the scratches. Usually it is done with the help of sandpaper that evens the car body surface. At the next stage, premier will be applied and then the paint of the affected areas will be redone, matching with the rest of the body color.

Same will be done for the dent repair, if they are bigger than a donut. But if the dents are smaller in size, they can be pulled out following a paintless dent repair method. These services can be availed at a much lesser cost, since it will not usually involve painting.

How to Avoid Hailstorm Damages

Though we might say, a hailstorm can happen at the most unpredictable time, but in reality, it is not. We can always see the clouds forming, getting darker in shade and there are lightening across the sky. Sometimes it goes noticeably windy and the entire atmosphere cools down significantly. Without these early symptoms, hailstorms cannot simply arrive, out of nowhere. So, you really get some time to save your car from its damages. You can very well cover your car with its cover, spread the door mats, on the windshield, cover the window glasses with thick mats or cloths to reduce the impact of the hailstorm, suggested an experienced mechanic who do hail damage repair in Spokane Valley.