The History of the Electric Vehicle 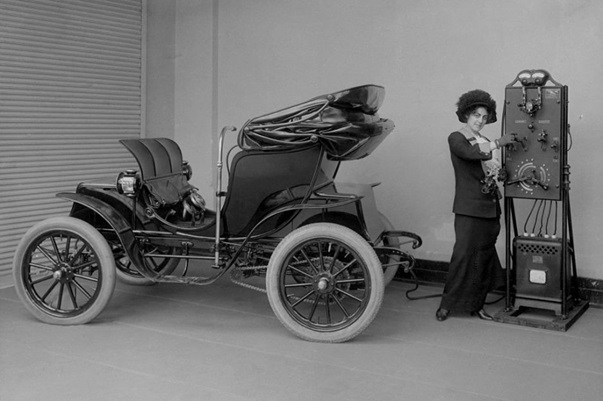 Electric Vehicles (EV’s) have undergone a huge perception shift in recent years, with a large proportion of general society viewing them as a possible solution to the environmental crisis. This is a view that also seems to be backed by government schemes and grants. Prices for Electric Vehicles will continue to drop as demand increases, and a report by Navigant Research suggests that electric vehicles sales could grow to nearly 7 per cent, or 6.6 million per year, worldwide by 2020.

However, how long have EV’s been around? It is a misconception that EV’s are a modern, high tech invention, in reality, they have been zooming around approximately since the 1800s!

History is unsure about who came up with the idea of Electric Vehicles, but arguably, the most significant breakthrough for was in 1865, when French physicist Gaston Plante invented a rechargeable battery that would make electric motors a practical and realistic solution.

Surprisingly, way back when Electric Vehicles and regular petrol/diesel cars were fighting head to head to determine who would lead society forward and become the primary method of transport. In fact, in the 1900s at one point there were double as many EV’s on the road than petrol/diesel cars. EVs also succeeded in being the first vehicle to ever achieve a speed of over 62mph (100kmh) in the all-electric La Jamais Content in 1899.

EV’s seemed to be leading the way; they were quieter, easier to drive and didn’t smell of pollution. However, Henry T Ford, then began the mass production of the Ford Model T. This reduced the price of cars significantly, slashing the price of petrol cars to about half that of

an electric vehicle, enabling the general population to start to gain access to a method of transport which had previously been restricted to the elite. So, in the early 1900s, most of the Electric Vehicle manufacturers began to cease manufacturing, unable to keep up with the competition.

Consequently, shoved into the background, Electric Vehicles received little funding or attention from the mainstream and although some made efforts to improve their drawbacks like their low speeds and low range, production costs remained high, and any new developments were still too expensive to receive significant public interest.

However, in the 2000s, the development of the Toyota Prius, which was released in Japan in 1997, was the world’s first mass-produced hybrid electric vehicle — signalling real progress within the EV industry. While, the Tesla’s Roadster, which went on sale in 2008 was another game-changer, although, it still had some limitations it was groundbreaking in its ability to cover 200 miles on just one charge of the battery. It inspired the general public, and the success of the vehicle inspired other household car manufacturers like Nissan and Chevrolet to also invest in the development of their own EVs. Following the rising information about climate change and a growing environmental consciousness among the public, Electric Vehicles environmental benefits helped it undergo a revival.

Electric vehicles have consequently made massive progress in their top speed, range and reduction of price. As of February 2018, there were just over 135,000 electric vehicles on UK roads. Eventually, as EV charging points become even more common, it’s easy to see a future where EV’s are the first point of call for people looking to buy an accessible but green method of transport.