Signs of a Failing Radiator 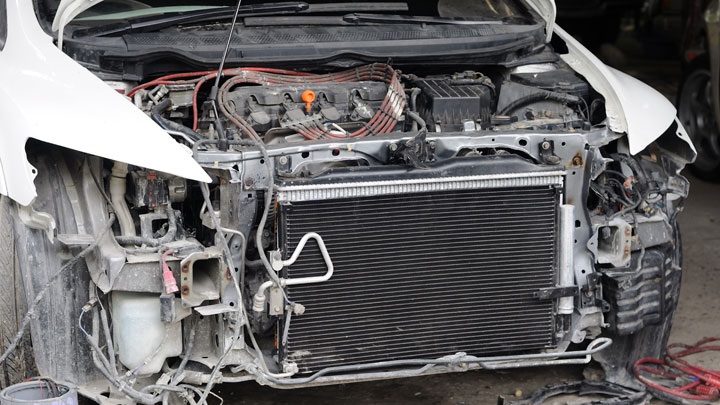 The radiator is one of the most critical parts of the engine’s cooling system. However, without the experience or technical know-how, noticing faults on the radiator can be quite hard.

Here are some of the common signs of a faulty radiator;

A fully functional radiator keeps the fluid the same texture as to when you put it in. Thicker liquids and discoloration are signs of a faulty radiator. Regularly check the fluids to ensure free flow and clear the radiator when clogged.

A functional radiator never leaks any fluids. If you notice fluids leaking from the engine, then most probably it is a radiator issue. The fluid leak is mostly caused due to radiator damage caused by rust buildup. The plastic parts of the radiator are also prone to wear and tear and eventually damages. The rust builds up is mostly caused by the use of dirty water.

Repair any leaking radiator as first as possible to save your engine life. Consider regular radiator flush to clear any rust building accumulating on the radiator. Leaking fluids reduce the amount of coolant available for the cooling engine. The overheating engine does not operate to perfection and can quickly fail.

For the case of highly damaged radiators, replace it with the high-quality hot rod radiators. These radiators are made with precision to offer lasting services compared to the other similar machines.

The front of the radiators is made of highly delicate fin-like additions that blow the hot coolant from the engine. The fins cool the engine by allowing air to pass through when driving. These fins are quite delicate such that gravel or high-pressure water bends them. Once they are bent, leaves and dirt clog on the surface, blocking the coolant.

The fins are also susceptible to damage during installation or repair. The more the fins are damaged, the lesser the coolant reaches the engine leading to overheating.

The cabin heater works such that a hot coolant passes through the cooler with the blower fan blowing the warm air into the passenger area. Blocked or faulty radiator cuts the supply of the heated coolant to the cooler hence no hot air reaches the passenger seat.

Other than the radiator, a faulty thermostat can also be at fault for the heating issues. Take time to observe both the components starting the repair.

Even though quite time-intensive, regularly checking your car’s radiator is the sure way to longer engine life. Before checking on the radiator, look at the state of the thermostat, possible clogging, and cooling system leaks. Also, ensure that the water pump, cooling fan, and the head gasket are all functional. Noticing faults early enough helps you avoid costly repair in later stages.