A History of Vehicle Signage and Advertising 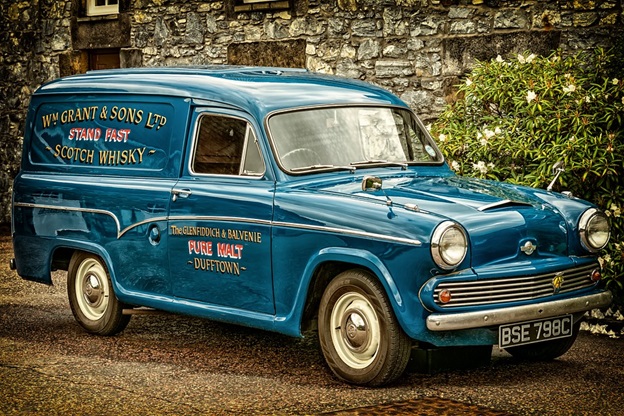 Automotive vehicle signage and advertising have been around for a long time. In fact, you may be surprised to learn that it has been around since automobiles were first invented more than 100 years ago.

Of course, vehicle advertising then was not like the vinyl car wrapping that we see today. There was an evolution of vehicle signage as it went from paint to vinyl. Then as printing and colouring technology advanced, the imagery and designs on the vinyl became more attractive.

Let’s examine this historical evolution of vehicle signage and advertising:

Milton Hershey became the first person in recorded history to advertise on a vehicle. The American businessperson who started the famous chocolate brand known as Hershey’s advertised his brand name by painting it on a vehicle in 1900.

Never done before, Hershey painted his brand on the sides of various vehicles that he sponsored for an automobile race. However, Hershey’s signage was written in plain text. There were no fancy colours or designs used for signage at the time.

But, once the idea of advertising on automobiles started to catch on with other companies, people began to see much more attractive signs and ads on vehicles.

In 1926, the Goodrich Corporation developed vinyl chloride by accident. The great thing about vinyl is that it can serve several purposes. It is like plastic, but more versatile. It can be made thin, thick, flexible, strong and colourful.

As a result, the new material was responsible for creating a lot of products and manufacturing jobs in the United States.

When researchers studied vinyl chloride further, they determined that it could be valuable in so many diverse industries. It even gave birth to a new industry called mobile advertising.

Unfortunately, the average small business owner could not afford to purchase vinyl because it was harder to come by and very expensive. The only institution that used vinyl for mobile advertising was the United States Air Force, which used vinyl to create labels for its military aeroplanes.

Between the 1920s and 1970s, various companies tried to advertise vinyl treatments that could cosmetically enhance vehicles.

But there was no real emphasis on using vinyl for advertising purposes because the vinyl production technology had not been perfected yet. It took many trials and errors in the attempts to make vinyl production better and cheaper.

The 1980s was the decade when new die-cutting technology was invented. This greatly reduced the production costs of vinyl and changed everything for companies.

Vinyl could now be massed produced like never before. Small businesses could finally afford to purchase the vinyl material for adding letters and advertisements to their vehicles without needing to paint them.

In 1993,a vinyl manufacturing company in Germany introduced vinyl colour wraps to cover an entire vehicle. Up until this point, the mobile vinyl ads being used were merely letters placed on vehicles.

Now Kay Premium Marking Films could change the entire colour of a vehicle without needing to paint it. Its vinyl wrap even protected the original paint job underneath.

This practice was first done for taxi companies that wanted a way to resell their vehicles at a later point. Since painting brand information would require repainting a vehicle to remove it, vinyl was an affordable and easier option for them.

It proved to be a success because when the vinyl wrap was eventually removed, the original paint remained in great condition.

As the 21st century rolled in, companies created better printing technology, which allowed them to print large, colourful and detailed graphics onto vinyl wrapping material. These printers were known as piezoelectric inkjet printers.

The advancement of computer technology and software made designing and printing these images onto vinyl so much easier. In fact, ordinary people were able to create vinyl decals from their very own homes.

And for people who wanted to wrap their entire vehicle with graphics and artistic ads, there were plenty of companies now offering this service, too.