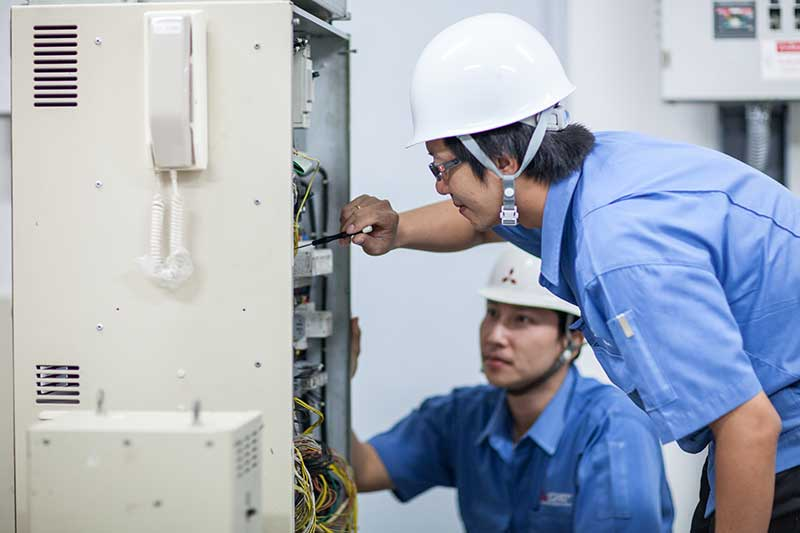 A hydraulic lift is a device used to lift heavy loads . It does this by amplifying forces, thanks to the pressure exerted by the transfer of a fluid (normally low-viscosity synthetic oils).

The operation of the hydraulic lift responds to Pascal’s principle . This has its origin in the seventeenth century, when the French physicist-mathematician Blaise Pascal enunciated the law that is summarized in that “ the pressure exerted on a fluid that is not very compressible and in equilibrium inside a container with non-deformable walls is transmitted with equal intensity in all directions and at all points in the fluid ”.

Although the concept had been available since the 17th century, the first patent for a hydraulic press did not come until 1851 and was granted to the American machinist Richard Dudgeon. What is now known as a hydraulic jack made its way onto the market, replacing the simple machines used in ancient times to support human or animal power (levers, inclined planes, hoists, screw or thread jacks, etc.).

The hydraulic lift, in its simplest concept, is composed of two pistons : one with a small section area and the other with a larger section. By applying a force on the small plunger, usually by means of a lever or a pump, the fluid inside the circuit is pressed, exerting a uniform pressure. Thanks to non-return valves, the circulation of the fluid in a single direction is possible and in this way the piston with a larger section is activated, on which the load to be lifted is placed. The result is a multiplication of the force according to the relationship between the sections of both pistons that allows the lifting of the load.

Although hydraulic lifts are used in construction and industry in general, their use has spread thanks to their use in the automotive sector. From its most basic example, such as the “jack”, which is used for simple workshop operations such as replacing a wheel, to the Automotive lift inspections, these types of elements have become fundamental tools in every mechanical workshop . And the fact is that the hydraulic lifters facilitate access to the underside of the vehicle and allow work to be carried out in a more agile and comfortable way.

In the field of mechanical workshops, there are several types of lifts depending on the required lifting function :

Single column elevator. This type of hydraulic lift is mobile and compact and, as a result, is the best option for small workshops that cannot permanently compromise a space for this purpose.

Within this type of elevator, there is a wide range of models depending on the required lifting weight. The most basic model of this variant is the “hydraulic jack”.

Two post lift. It has two columns that can raise the weight in a balanced way and is the most popular model in mechanical workshops. Approximately, a two post hydraulic lift can lift a maximum of 6 tons.

Four column lift. It has 4 columns and, unlike the previous model, it does not require a specific anchor to the ground and can lift a greater load. Currently, a wide range of hydraulic lifts of this type is marketed, with different capacities and heights.

Alignment elevator. These are specialized lifts that have additional equipment and features to facilitate the vehicle’s wheel alignment function .

Scissor lift. It is a model of hydraulic lift that uses an “accordion” type mechanism.

The power and speed of the hydraulic lifters can be controlled by means of servomechanisms that simplify the maintenance of these equipment in relation to mechanical friction. However, certain maintenance tasks cannot be ignored, such as checking that the support blocks are in good condition or that the screws and nuts are properly lubricated .

In addition, since it is based on a hydraulic system, the necessary inspections and maintenance must be carried out to ensure the absence of leaks in the circuit (for example: check the absence of leaks in hoses or pistons). Carrying out the appropriate inspections recommended by the manufacturer ensures that the equipment complies with optimal operating conditions and there is no risk of accident due to system failure. However, it is essential that the operators who use this equipment have the necessary training on its operation and on risks and preventive measures.

On the other hand, it is recommended that the set-up and periodic review of this type of equipment be carried out by a technician trained and authorized by the manufacturer of the hydraulic lift.

As a final conclusion, it should be noted that there are numerous types of hydraulic lifts and, in order to choose the most suitable one, the type of vehicle they are going to support, the space they occupy and the tasks that are going to be carried out in them must be taken into account.