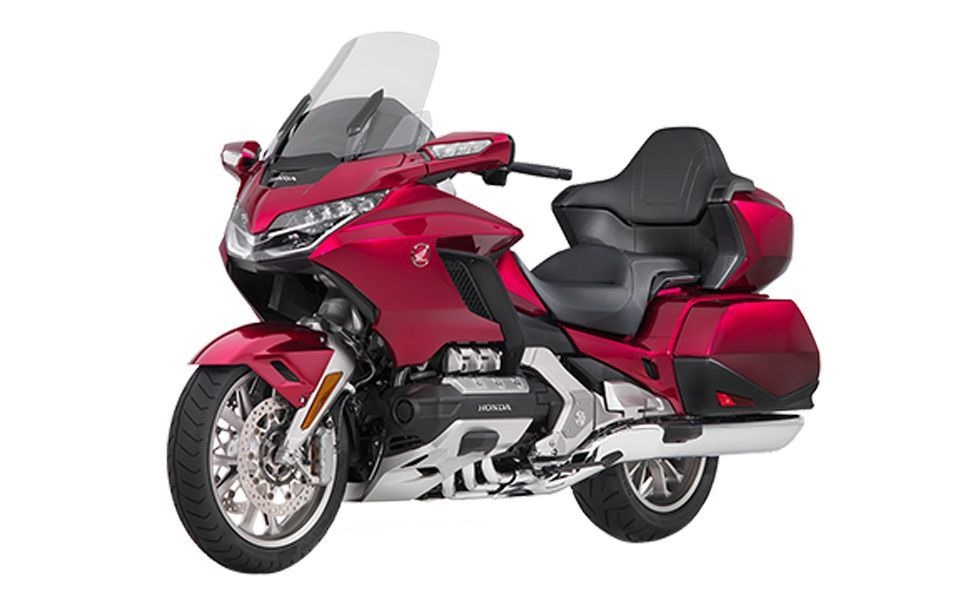 The Honda Gold Wing is an American-inspired motorcycle product that is built in Japan. It was manufactured keeping in mind the North American market. It’s one of the most portliest bikes you can buy. Its first-generation model was introduced way back in 1974, and over the years, the motorcycle kept getting heavier. However, in its latest seventh-generation form, it is lighter and more compact than ever before. The Honda Gold Wing is a bike made for long-distance touring.

Packed neatly within the frame is a 1833cc, six-cylinder engine that produces 122.5bhp and 170Nm of torque. The motor is liquid-cooled and comes paired to a 7-speed DCT automatic transmission. The Honda Gold Wing is BSIV-compliant.

The Honda Gold Wing is one big bike to look at. Up-front, it boasts of a huge V-shaped headlight and a massive windshield that can be manually adjusted. It has a robust fairing along the sides with a part of the engine protruding out. There’s quite a lot of chrome on the lower half of the bodywork as well. The seats are wide; so is the tail section. It gets a top box at the rear along with a spoiler above. The Gold Wing has long exhausts tucked away neatly underneath on either side. There are lots of switches and buttons around. There are three analogue pods and a digital screen. The latter shows information like the radio frequency, odometer and trip meter, while the tachometer, fuel level indicators, speedometer, and engine temperature are all analogue instruments. Buttons and witches are for the infotainment system, suspension, hazard lights et al. There are also buttons for cruise control. In terms of dimensions, the Gold Wing is 2575mm in length, 905mm in width and 1430mm in height. The engine is very refined and sounds quite punchy too. Throttle response is instant. And there’s lots of power and torque at your disposal. At 379kgs, the bike feels very heavy. The ground clearance, on the other hand, is 130mm, while the bike has a wheelbase of 1695mm and a seat height of 745mm.

The Honda Gold Wing has a fuel tank capacity of 25 litres. In terms of mileage, the bike is capable of returning 14kmpl by ARAI, in BSIV guise.

The Gold Wing is easily one of the most comfortable bikes you can sit on. The riding position is upright, and the handlebar is nice and wide. The foot pegs are placed in the middle, which is really convenient. The windshield helps blocking wind blast and the rear view mirrors are placed well. The seats offer incredible amounts of cushioning and the backrest for the pillion’s seat is great. You tend to feel the bike’s heft when dodging traffic in the city, but it’s alright out on the highways. The bike feels very planted and stable at high speeds and ride quality is very plush, with every bump being soaked in with aplomb. Handling too, is very impressive. At the front, the bike rides on double wishbone suspension, while the rear gets a pro-link setup. As far as the chassis is concerned, it is built around an aluminium diecast twin tube frame. The Gold Wing runs on 130/70-R18 tyres at the front and 200/55R-16 tyres at the rear. Retardation duties are taken care of by disc brakes at the front and at the rear.

Feel free to step into a showroom or browse through the company’s website to know all the necessary details on the bike. It will help you with details that cover specifications, colours and accessory options.

The Honda Gold Wing is available in one variant: Gold Wing DCT for ₹ 28.29 lakh (ex-showroom, Delhi). For further details and the on-road price of the bike, you can head to autox.

There is a lot more information available on the Honda Gold Wing, along with detailed reviews of the same. You can tune into autox to know more about the brand, its models and news related to the product. Also, grab the latest info on the new bikes, only at autoX.